Psilicone theatre was founded in 2005 by two visual artists – Auksė Petrulienė and Darius Petrulis.
It is based on the original animation technique: miniature and flexible silicone puppets are animated by pressing them between perspex glasses
and revealing this process as live video projection, recognisable because of its original aesthetic.
Psilicone theatre use video projection as the x-ray for abandoned places and memories.
From 2015 Psilicone theatre got involved in research of the post-industrial places.
First performance from the industrial trilogy was Hairy Hairy Mouth based on the history of the Synthetic Yarn Factory in Kaunas and revealing the grotesque of the soviet planned industry. The second performance – Factory: Love and Loss, was premiered in 2022 in Guimaraes, Portugal and dedicated to the historical textile factory Fabriko de Castanheiro and the Industrial revolution in Europe. Performance Work is the third part of the industrial trilogy.

The script of the performance is the result of an interesting coincidence – the collaboration between the MUAR and Backup Stories began in 2020 in the former miners’ footwear factory Schungfabrik when the team of Backup Stories was researching the rubber shoe factory “Inkaras” (Anchor). After walking a long way towards each other, the Kaunas sneakers and the miners’ boots from the industrial southern region of Luxembourg finally meet in the performance.
The shoe metaphor not only helps to transcend the different socio-economic systems in which the Luxembourg and Lithuanian industries grew and collapsed. The shoes on the left and right feet invite us to step in search of a unified rhythm that helps us, with our feet firmly planted in the ground, to remain human in the face of dramatic economic and social changes. The show’s actors – miniature flexible silicone figures – embody original characters such as Left and Right Miner’s Boots, Batch of Faulty Inkaras Trainers, Lost Gloves, etc.

This performance by Auksė Petrulienė will be accompanied by the Luxembourg composer, jazz musician and multi-instrumentalist Pol Belardi, who chose an exciting semi-electronic aggregate setup consisting of acoustic instruments made of metal (vibraphone, cymbals, bells…) and an array of digital devices and effects.
His live music performance thus incorporates industrial sounds recorded in the region’s remaining factories (Massard foundry and Cimalux), as well as musical motives derived from the shoe factories’ brand names. The semi-improvised set will be in close dialogue with Aukse’s handling of the psilicone puppets.
A true and special “Remix“ that will close the municipality’s activities of this cultural year of Esch22. 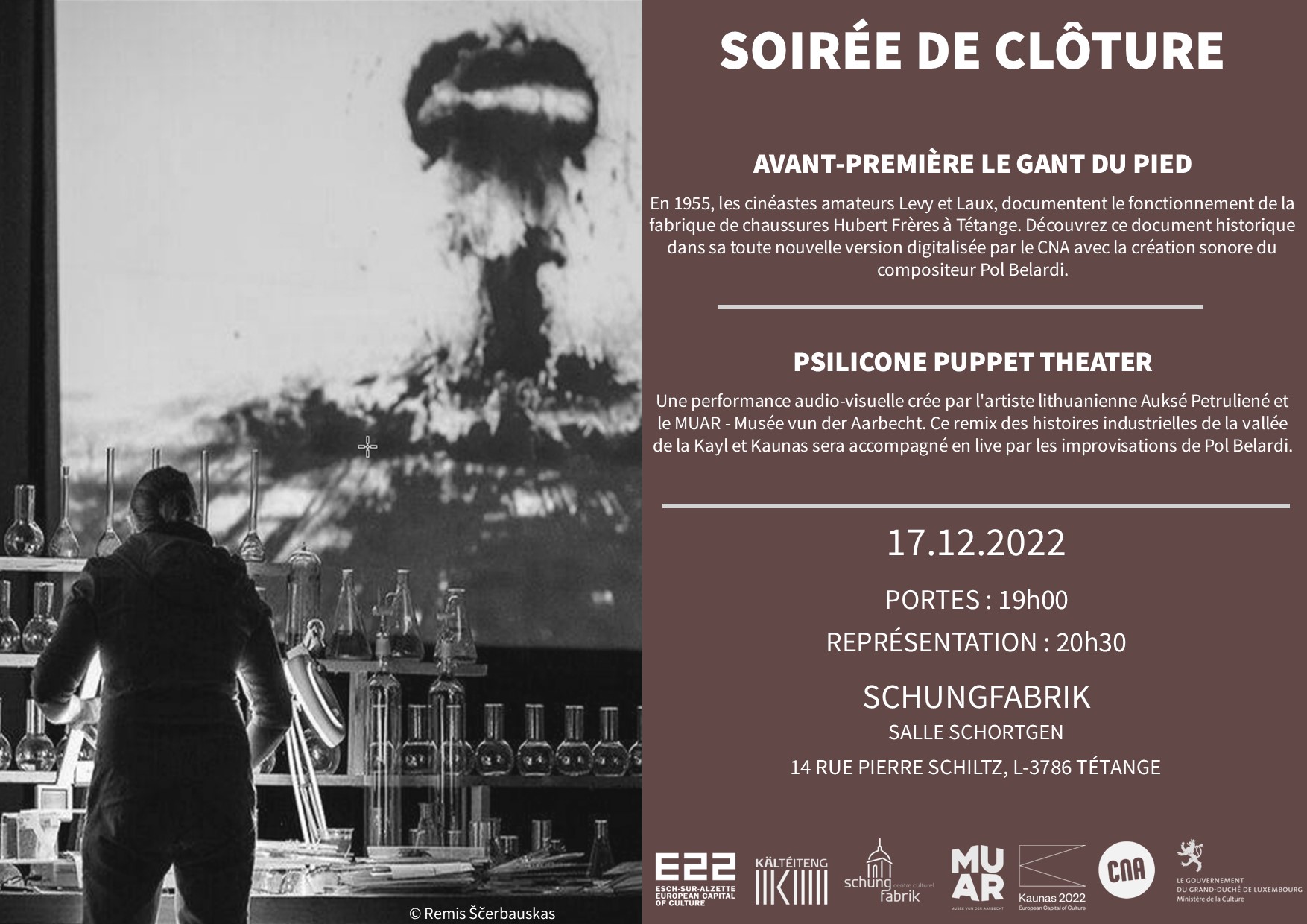